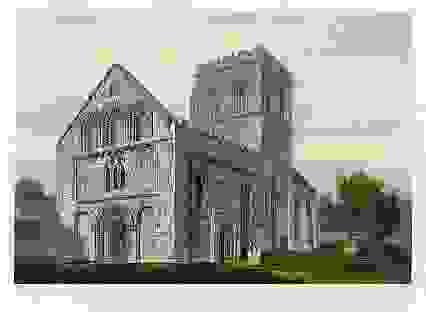 Leaflet and Trail: St Mary's Church in its landscape by Dr Susan Walker.

St Mary’s Church in its landscape Leaflet and Trail

IntroductionSt Mary the Virgin, Iffley, is a virtually undisturbed Romanesque church. There is evidence that it was built under the auspices of one of England’s wealthiest magnates, Geoffrey de Clinton, Treasurer to Henry I and builder of Kenilworth Castle. What is less clear is how it was cared for through the centuries leading up to, and following, the English Reformation of the 16th century. When the diocese of Oxford was formed from part of the pre-Reformation diocese of Lincoln in 1542, Iffley’s patronage moved from Osney Abbey to Christ Church Cathedral. At this time a new wing was added to the rectory, and not long afterwards extensive work was undertaken on the boundary walls of the churchyard, walls that define and protect the sacred space within which the church stands. This trail explores the archaeological and historical evidence for this work.Our sleuthing will highlight a key player: Archdeacon Barten Holyday (1593-1661). He lived in the rectory as both a family man and an influential representative of Iffley’s patron: Christ Church. We can trace his mark on some of the walls of the churchyard.

Medieval IffleyThe earliest known buildings of Iffley hug the contour of Rose Hill at 200 feet above sea level, high enough to command access to and a view of the river and meadows beyond, also to protect the village from flooding.From south to north, the core buildings included a hall (manor house) at Court Place (presumably where the manorial courts were held), the church of St Mary, a 13th-century hall on the site of the rectory and probably also a farm, now called Manor House. Below was a riverside mill, destroyed by fire in 1908. The de St Remy family from Normandy were lords of the manor of Iffley in the mid-later 12th century, related by marriage to the de Clinton family. It was they who most likely built the church and Court Place. They also owned the mill.Iffley was located close enough to the River Thames to use its waters for powering the mill, for protected fishing and for wider access to the Thames Valley.Access to Iffley by land was via Church Way, the modern successor of a medieval route following the 220-foot contour of Rose Hill. This route once continued south to Littlemore and Sandford, with access for pig grazing and woodcutting at Hog Common to the south of Court Place. Church Way is crossed by lanes, walls and hedges marking the boundaries of fields once worked by tenant farmers of the manor. Tree Lane and Eastchurch were footpaths to Temple Cowley and Littlemore, both once forming parts of Iffley parish.Work is ongoing to explore the links of the church to the river. Was this branch of the Thames navigable up to the mill before the lock was built in the 17th century? Was there a landing-stage below Court Place, aligning with the church? Did boats go to and from Oxford from the site of the old ferry north of the mill?

The walls around St Mary’s, and Archdeacon Barten HolydayThe boundary walls around the churchyard were probably built by masons from Oxford when the Archdeacon of Christ Church lived in the rectory at Iffley with its spacious 16th-century wing.A likely time for their first construction is after 1626, when Barten Holyday, playwright, translator of the Roman poets Horace, Perseus and Juvenal and former chaplain to King Charles I, was appointed Archdeacon of Oxford. The son of an Oxford tailor, Thomas Holyday, Barten married Elizabeth Wickham, daughter of the leaseholder of Iffley rectory, William Wickham of Abingdon. Uniquely among the archdeacons of Oxford, Barten Holyday appears to have lived with his family in the Rectory at Iffley. His son George was baptised in St Mary’s in 1634. The walls of the churchyard appear to be structurally linked with the building of a new kitchen wing on the east side of the rectory. During the Civil Wars of the 1640s, having espoused (reportedly under some duress) the Parliamentarian cause, Barten Holyday was granted a living in Berkshire. He returned to Iffley at the Restoration of King Charles II in 1660. Here he died on October 2nd, 1661, aged 68, “of the new epidemicall disease that rageth now abroad” and was buried in Christ Church cathedral.Archdeacon Holyday was a writer of notable aphorisms, of which the most famous is “A man may as well open an oyster without a knife, as a lawyer’s mouth without a fee.” Perhaps the nearby Thames inspired another enduring thought: “River is time in water; as it came, still so it flows, yet never is the same.”

START the trail at the WEST DOOR of St Mary’s church.